What is a Pivot Table in Excel?

A Pivot Table gathers all the data in an Excel spreadsheet (or range of a spreadsheet) and presents a summary of this data in a table. This table allows you to summarise information such as:

This is best explained by way of an example...

An Excel pivot table can summarise the data in the above spreadsheet for easy analysis.

For example, the above pivot table on the right shows the total sum of all sales, for each of the four sales people.

A further feature of Excel pivot tables is the ability to quickly extract the data from any part of the pivot table.

For example, if you wanted to see a list of Brown's sales during January 2016, you would simply use the mouse to double click on the cell showing this value (the value $28,741 in the above example Pivot Table).

Excel then creates the new worksheet (shown below), listing Brown's sales during January 2016. 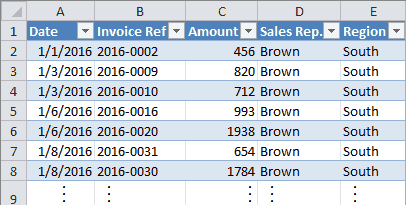 For the time being, don't worry about how the above pivot tables are produced. This section of the tutorial simply aims to answer the question "What is a Pivot Table in Excel?". We will learn how to create these pivot tables in the following sections of this tutorial.

Continue to Part 2 of the Excel Pivot Table Tutorial  >>