The Variance is a statistical measure, that is commonly used across a set of values, to identify the amount that the values vary from the average value.

When your data set is a sample of a population, (rather than an entire population), you should use a slightly modified form of Variance, known as the Sample Variance. The equation for this is:

In Excel 2010, the VAR function has been replaced by the VAR.S function, which has improved accuracy.

Although it has been replaced, the Var function is still available in Excel 2010 (stored in the list of compatibility functions), to allow compatibility with earlier versions of Excel.

The Excel VAR function returns the sample variance of a supplied set of values. 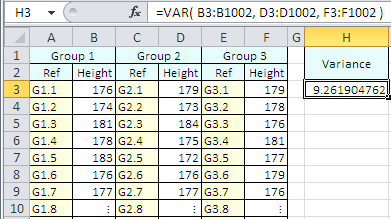 Imagine you want to find out the variance of the heights of adult males in London. It is not realistic to measure the height of all males, but you could take a sample of the population and measure their heights.

The variance of the heights of the sample group is calculated in cell H3 of the spreadsheet. The formula for this, (shown in the spreadsheet formula bar), is:

As shown in cell H3, the variance of the individual heights of the sample group is calculated as 9.261904762 cm.

The example above shows the arguments to the Var function being input in the form of 3 cell ranges. However, you can also input figures directly, as individual numbers or number arrays.

For example, if you wanted to include two further heights, of 176cm and 177cm into the sample you could add these directly into the above function as follows:

For further information and examples of the Excel Var function, see the Microsoft Office website.

If you get an error from the Excel Var Function, this is likely to be one of the following: