A full explanation can be found on the Wikipedia Standard Deviation page
STDEV & STDEV.S Functions

In Excel 2010, the STDEV function has been replaced by the STDEV.S function, which has improved accuracy.

Although it has been replaced, the Stdev function is still available in Excel 2010 (stored in the list of compatibility functions), to allow compatibility with earlier versions of Excel.

The Excel STDEV function calculates the sample standard deviation of a supplied set of values.

where the arguments, number1, [number2], etc., are between 1 and 255 numeric values, arrays of values, or references to cells containing numbers. The supplied arguments must provide at least two numeric values to the function.

If you are using a current version of Excel (2007 or later), you can enter up to 255 number arguments to the Stdev function. However, in Excel 2003, the function can only accept up to 30 number arguments. 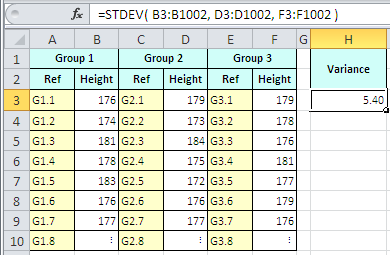 Imagine you want to find the standard deviation of the heights of adult males in London. It is not realistic to measure the height of all males, but you could take a sample of the population and measure their heights.

The standard deviation of the heights of the sample group is calculated in cell H3 of the spreadsheet. The formula for this, (shown in the spreadsheet formula bar), is:

As shown in cell H3, the standard deviation in the individual heights of the sample group is calculated to be 5.40 cm.

In the example above, the arguments to the Stdev function are input as 3 cell ranges. However, you can also input figures directly, as individual numbers or number arrays.

For further information and examples of the Excel Stdev function, see the Microsoft Office website.

If you get an error from the Excel Stdev function this is likely to be one of the following: