Although it has been replaced, the Percentrank function is still available in Excel 2010 (stored in the list of compatibility functions), to allow compatibility with earlier versions of Excel.

The Excel Percentrank function calculates the relative position of a specified value, within a set of values, as a percentage.

Where the function arguments are listed in the table below:

In cells B1-B4 of the spreadsheet below, the Excel Percentrank Function is used to calculate the relative position of various values within the array of values in cells A1-A9.

For further examples of the Excel Percentrank function, see the Microsoft Office website

If you get an error from the Excel Percentrank function this is likely to be one of the following:

Also, the following formatting problem is encountered by some users:

If the result of your Percentrank function is presented as a decimal, or shows 0%, this is likely to be due to the formatting of the cell containing the function.

This can therefore be fixed by formatting the cell as a percentage, with decimal places, if required.

The easiest way to format a cell to display a percentage is to select the cell(s) to be formatted and then select the percentage button from the 'Number' group on the Home tab of the Excel ribbon (see below):

This uses the default percentage formatting style for your computer system which might be exactly what you require.

However, if you want to change the number of decimal places that are displayed, this can be done within the 'Format Cells' Dialog Box, which is brought up by clicking on the dialog box launcher (shown in the above image). 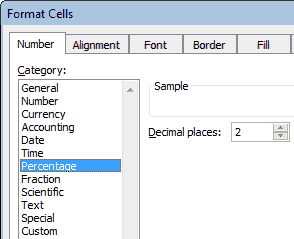