The Normal distribution is a continuous probability function that is given by the formula:

where μ is the mean of the distribution, σ2 is the variance, and x is the independent variable for which you want to evaluate the function.

The Cumulative Normal Distribution function is given by the integral, from -∞ to x, of the Normal Probability Density function.

In Excel 2010, the NORMINV function has been replaced by the NORM.INV function, which has improved accuracy.

Although it has been replaced, the Norminv function is still available in Excel 2010 (stored in the list of compatibility functions), to allow compatibility with earlier versions of Excel.

The Excel NORMINV function calculates the inverse of the Cumulative Normal Distribution Function for a supplied value of x, and a supplied distribution mean & standard deviation.

Where the function arguments are:

Excel uses an iterative method to calculate the Norminv function and seeks to find a result, x, such that: 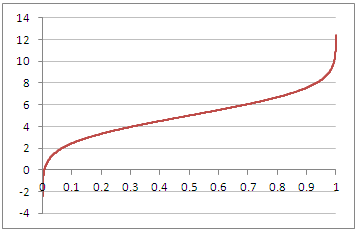 The above chart on the right shows the Inverse Normal Cumulative Distribution Function with a Mean of 5 and a Standard Deviation of 2.

If you want to calculate the value of this function when the probability = 0.6, this can be done using the Excel Norminv function, as follows:

For further information and examples of the Excel Norminv function, see the Microsoft Office website.

If you get an error from your Excel Norminv function this is likely to be one of the following: