The kurtosis of a data set provides a measure of the peakedness of the distribution of the data, relative to the normal distribution.

The kurtosis is described further on the Wikipedia kurtosis page.

The Excel KURT function calculates the kurtosis of a supplied set of values.

where the number arguments are a minimum of four data values for which you want to calculate the kurtosis.

Each of the number arguments can be an individual numeric value or an array of values. These can be supplied to the Kurt function either: 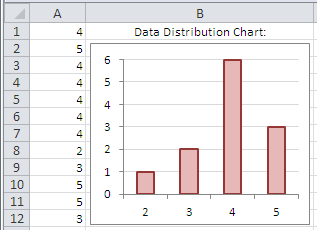 Column A of the above spreadsheet on the right shows an array of data, alongside the associated data distribution chart.

The kurtosis of the data in column A of the spreadsheet can be calculated using the Excel Kurt function as follows:

This gives the result 0.532657874, indicating a distribution that is relatively peaked (compared to the normal distribution).

For further details and examples of the Excel Kurt function, see the Microsoft Office website.

If you get an error from the Excel Kurt Function, this is likely to be one of the following: