In Excel 2010, the Fdist function has been replaced by the F.Dist.Rt function, which has improved accuracy.

Although it has been replaced, the Fdist function is still available in Excel 2010 (stored in the list of compatibility functions), to allow compatibility with earlier versions of Excel.

However, the Fdist function may not be available in future versions of Excel, so it is advised that you use the F.Dist.Rt function if possible.

The Excel FDIST function calculates the (right-tailed) F Probability Distribution, which measures the degree of diversity between two data sets.

Where the function arguments are:

If either deg_freedom1 or deg_freedom2 are decimal numbers, these are truncated to integers by Excel. 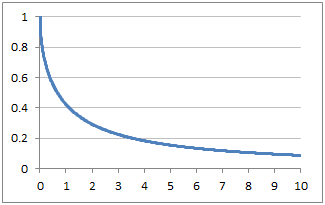 If you want to use Excel to calculate the value of this function at x = 5, this can be done using the Fdist function, as follows:

For further details and examples of the Excel Fdist function, see the Microsoft Office website.

If you get an error from the Excel Fdist function this is likely to be one of the following: